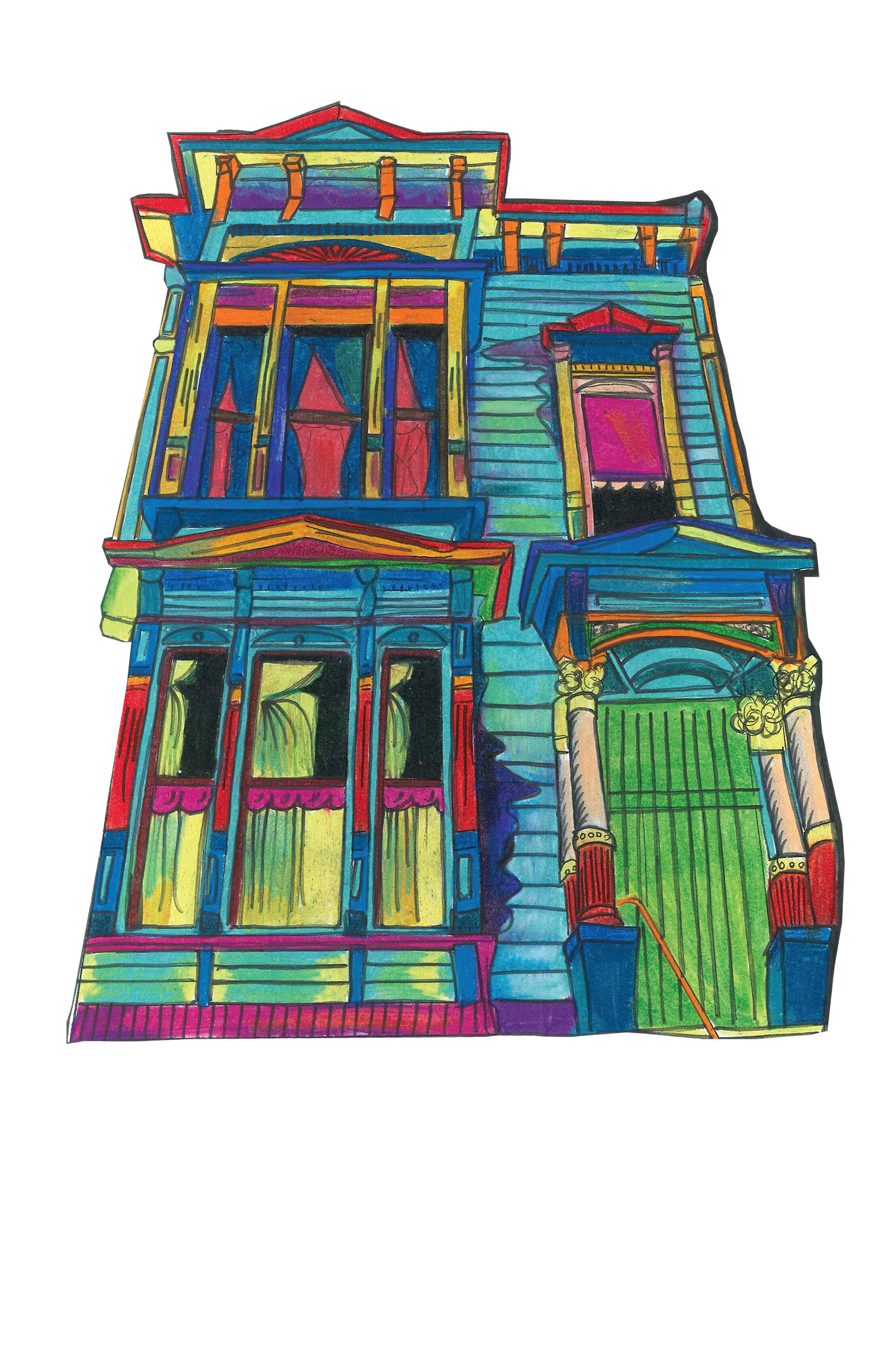 Illustration by Eva Rodriguez
Linda Karlsson
Creo Noveno
Allison Michie
Ashley Bowen
T
he young studio arts major could pass for any artistic student. Dressed in black from head to toe, with ripped pants and a leather jacket, she sat on a bench and fiddled anxiously with a camera bag hanging from her left shoulder.

What sets this woman apart from her classmates is not what happens in school, but what happens afterward. At night, when her friends go home to study, cook and shower, Amy N.– who asked that Xpress not use her full name because of the stigma– sleeps in her car.

“My family is especially concerned especially after my mom told my brother,” according to Amy, who said her brother worried about the long-term effects. “His idea is that you can only be successful if you have a stable place to stay.”

Amy’s situation is not unique. SF State students and faculty are feeling the impact of the city’s increasingly expensive landscape. In response to rising demand for on­-campus housing, President Leslie E. Wong announced plans for a new housing development in University Park South, set to begin construction September 2016. The University has narrowed down their choices to four development teams, whose proposals for the project are due Oct. 15, according to the project’s request for proposals.

“There is no question that housing for students and employees is the number one issue on my desk,” Wong said.

The housing crisis in San Francisco, caused by the rapidly expanding technology industry and increased migration into the city, has directly SF State students by significantly limiting their housing options, according to Jason Porth, Executive Director of University Corporation. Rent prices skyrocketed last year and continue to rise, making San Francisco the most expensive city in the United States according to a January 2015 report from Zumper, showing the average cost for one bedroom apartments in the city at $3,410 and two bedroom apartments at $4,690. 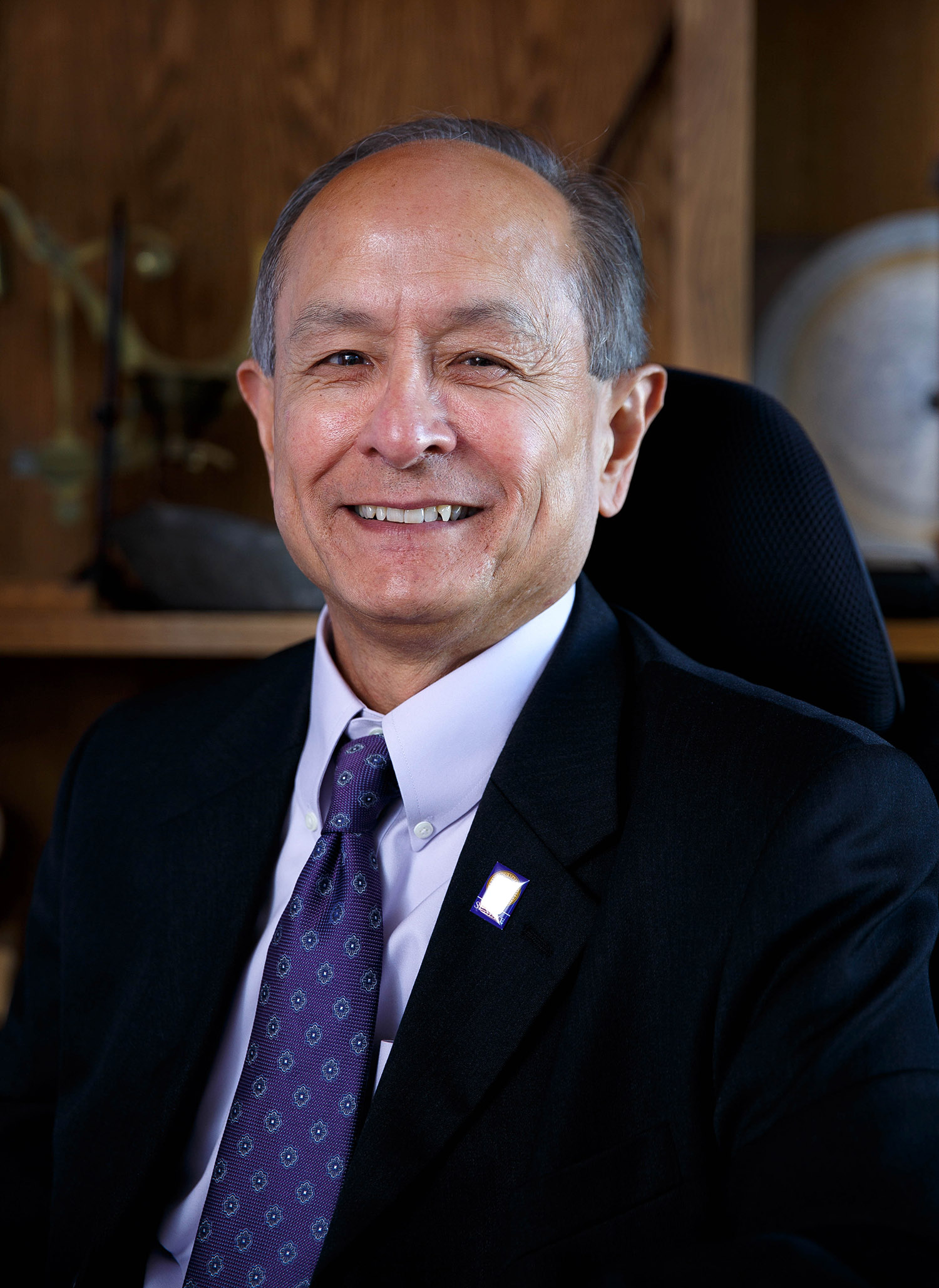 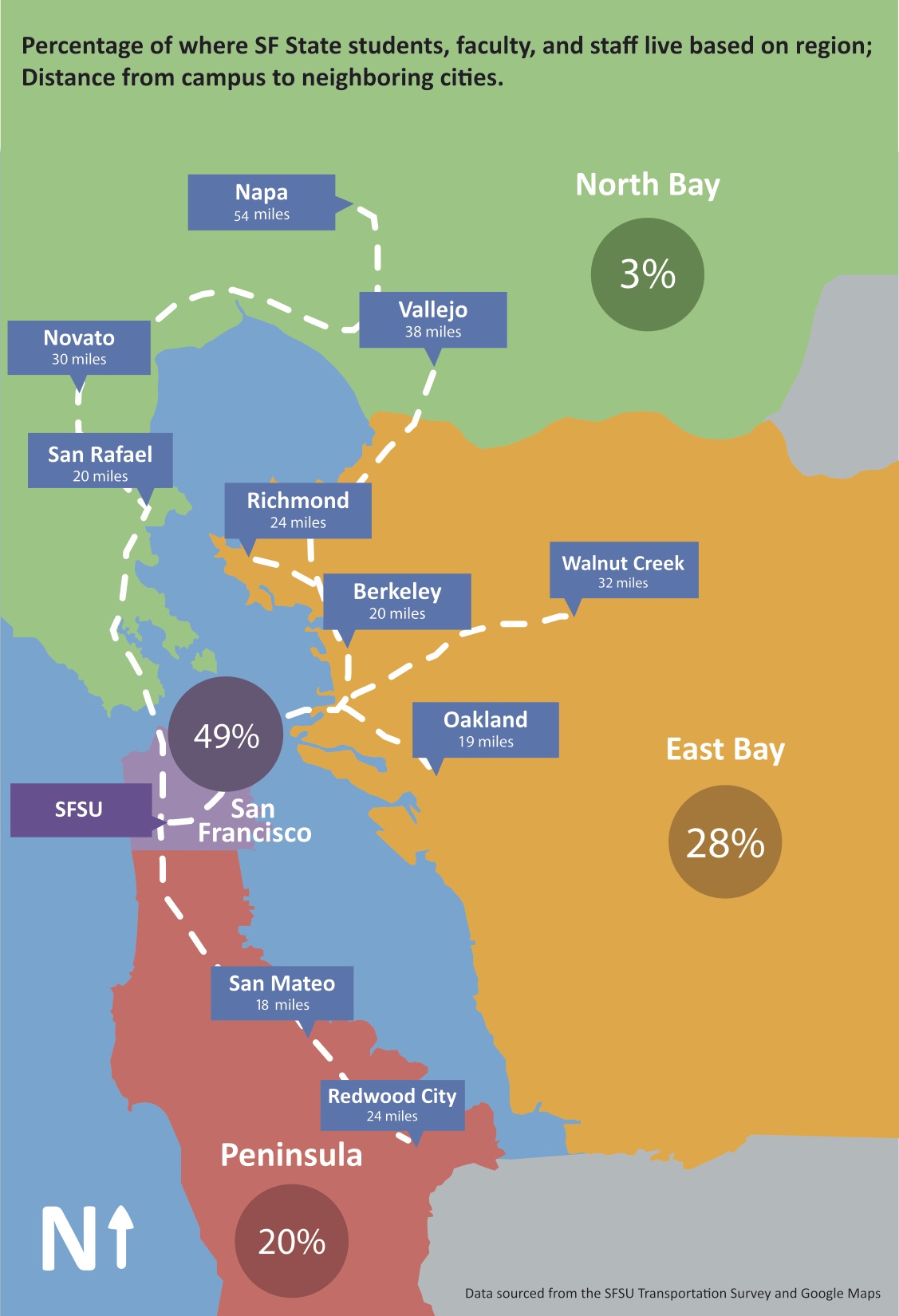 Graphic by
Harlan Frost
Rudolph Tescallo, 23, a senior psychology major, said he cannot afford rent in San Francisco, so he sleeps on friends’ couches Monday through Thursday every week.

“I jump from house to house,” Tescallo said. “I have three different friends (whose houses) I stay at regularly, and if none of them can house me during the week then I’ll go to another friend. Then, during the weekend I go back to Sonoma County and stay at my parents’ place.”

Because living on campus became too expensive, Tescallo said he was forced to look for more affordable housing. After searching unsuccessfully for more than four months, he said he had no choice but to couch surf.

What he misses most about having his own home are his family meals, having downtime and getting enough sleep at night, Tescallo said. 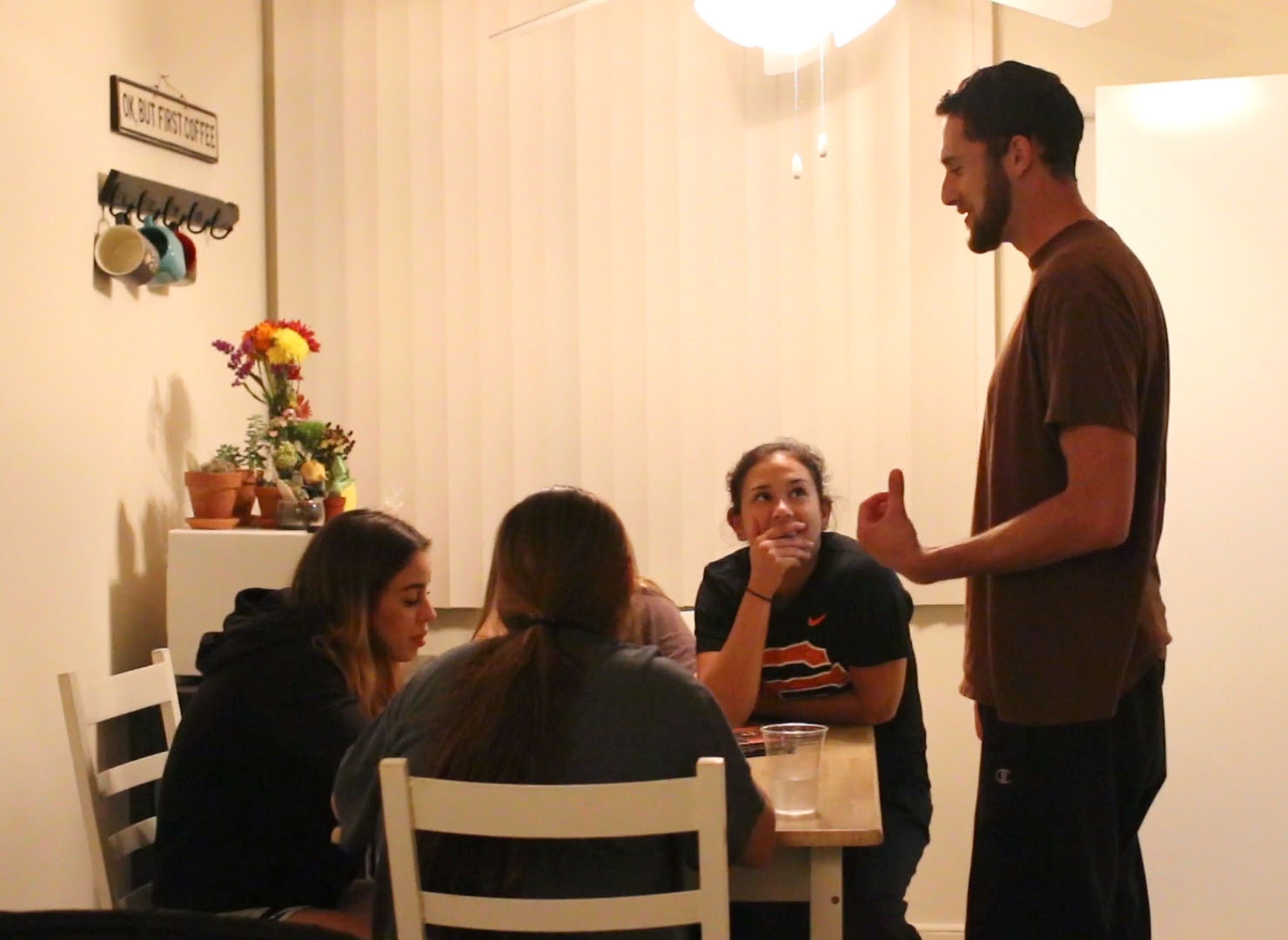 Rudolph Tescallo, senior psychology major, lies on the couch he will be sleeping on for the night at his friend’s house at Westlake Village Apartments in Daly City Wednesday, Sept. 23. (Screen Shot Jocelyn Carranza / Xpress)
Rudolph Tescallo, senior psychology major, hangs out with four SF State softball players at their Westlake Village apartment in Daly City, where he will be staying the night on their couch Wednesday, Sept. 23. (Screen Shot Jocelyn Carranza / Xpress)
SF State commuter student crashes on couches
SF State psychology major Rudolph Tescallo has been couchsurfing for the last three months. He's been jumping from house to house, staying at different friends houses around San Francisco during the week due to the lack of affordable housing in and around campus.
I've been looking for very cheap places, which you don't find here.
- Rudolph Tescallo
”
“
Map by Harlan Frost and Lulu Orozco
Explore student housing by hovering over the house icons

As securing a place to live becomes more difficult, and SF State’s waitlist for student housing continues to grow, obtaining a spot on the list plays an increasingly vital role in many students’ decision to attend SF State, according to Porth.

“There’s that kind of threshold question: will they end up here?” Porth said. “If they’re not in student housing, which is more affordable, then they’re on the open market, living in situations where there’s a lot of students to a room. That clearly impacts quality of life, and I would imagine it impacts the ability to succeed academically.”

Phase one of the proposed on-campus housing project would overhaul the block at Cardenas and Varela avenues across from SF State into a mixed-use development, comprised of ground-level storefronts and approximately 90 units of student housing above the ground floor, according to the concept approval from California State University’s finance committee in March 2014.

“The waitlists (for housing) here on campus are incredibly long, and we’re eager to help meet that demand,” Porth said. “There’s also a need (for) more campus amenities, places to meet up with friends and colleagues (that are) better than we currently have here, and this project would help fill that void as well.”

The project will be funded through a public­-private partnership agreement, which places all financial, construction and management responsibility on the chosen developer, said Stephanie Thara, CSU Public Affairs Specialist. As per the CSU concept approval, SF State will provide a ground lease to UCorp, which will then sublease the parcel to the project developer, Porth said. The developer would then stand to earn income off the housing and retail rent on the project, as well as provide UCorp and the University a means to pay off bond debt that currently is owed on the parcel, according to Porth. 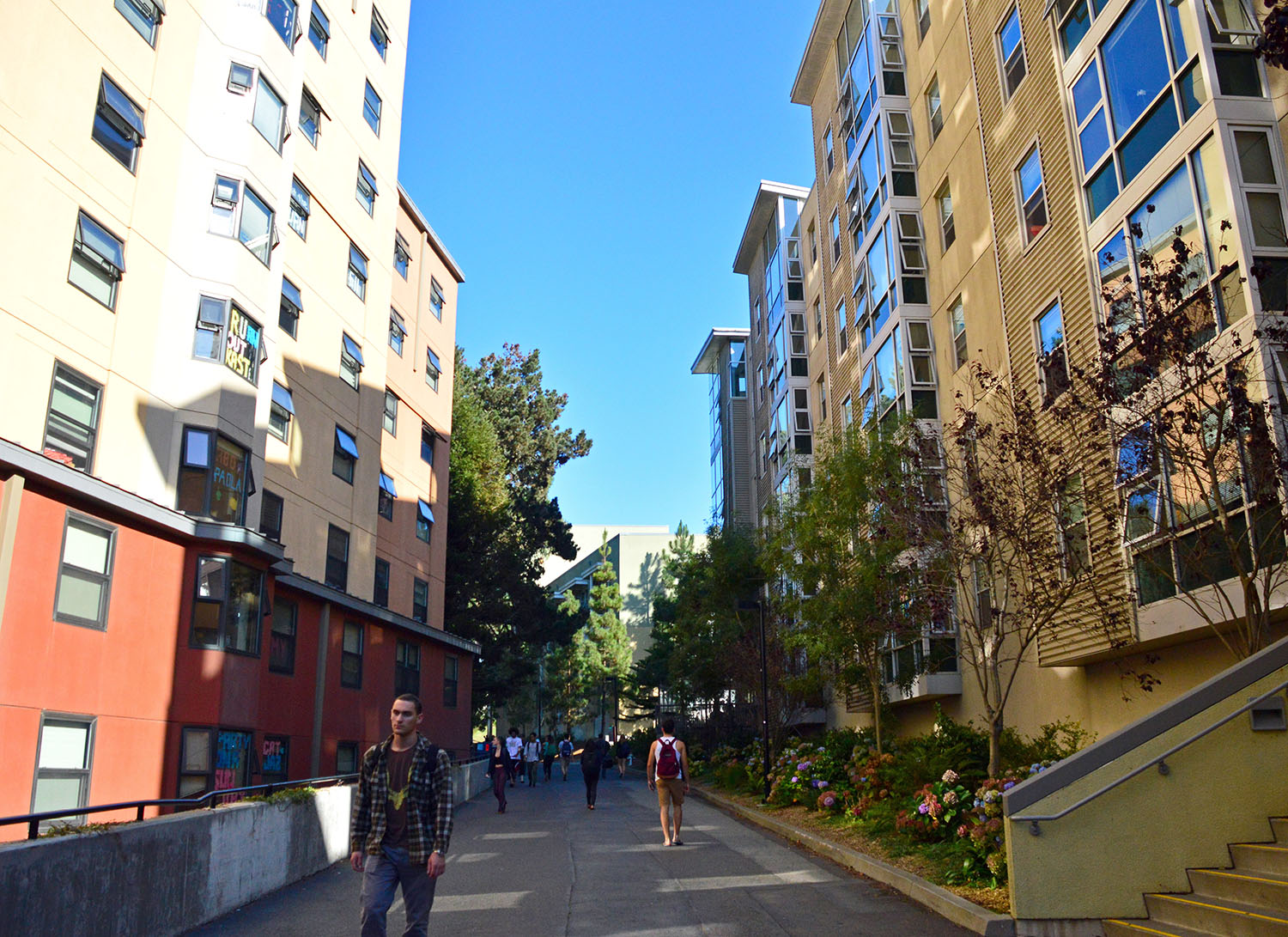 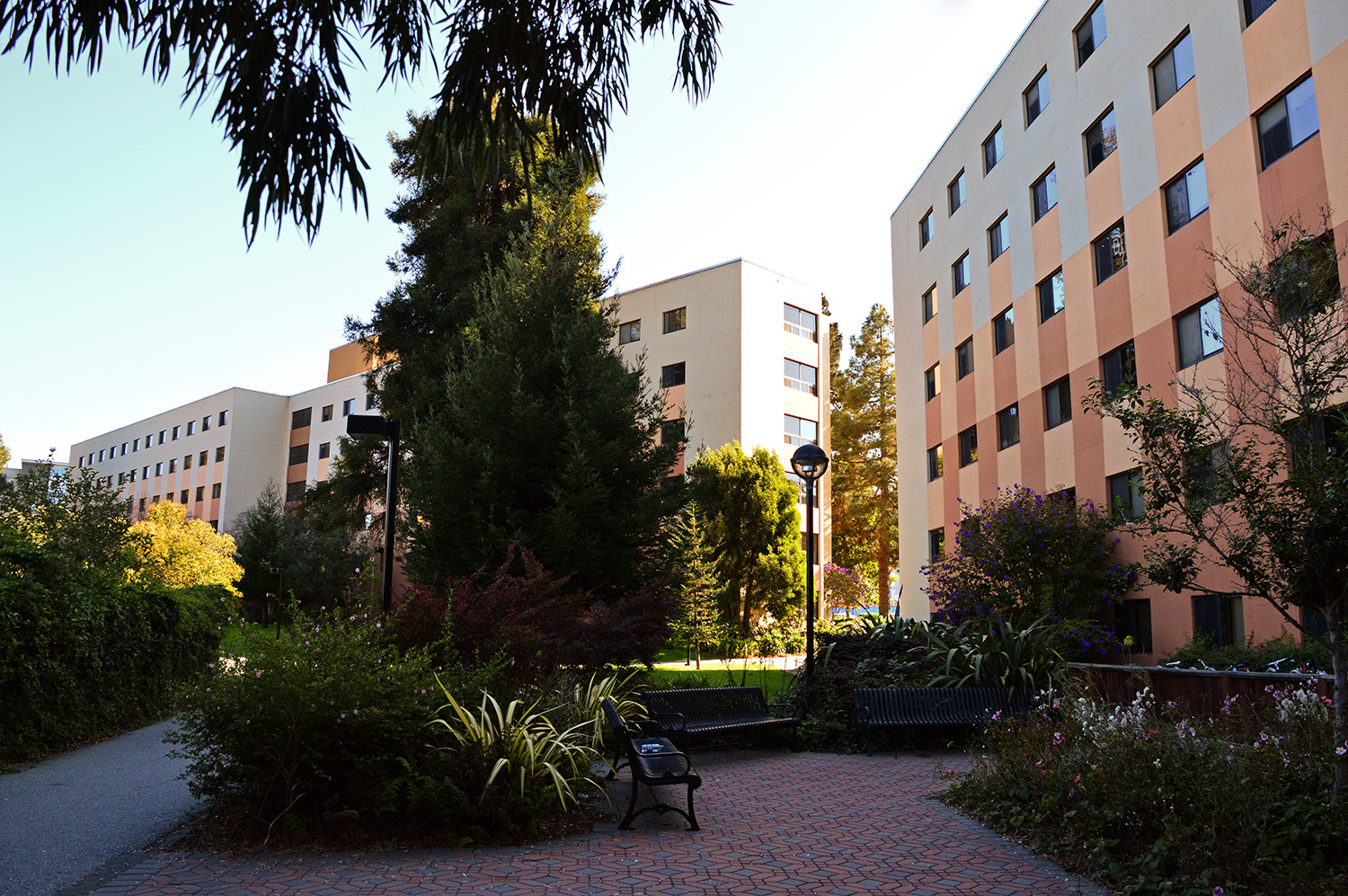 Students walk between the Towers at Centennial Square Apartments, catered to the Science and Technology theme community, and the Village at Centennial Square, consisting of buildings A and B for new and returning residents and building C for the Global Village Community, dedicated to a culturally diverse living environment where both domestic and international students live together at SF State Tuesday, Oct. 13, 2015. (Katie Lewellyn / Xpress)
Mary Park and Mary Ward Residential Halls are on campus housing for first-year students attending SF State. (Katie Lewellyn / Xpress) 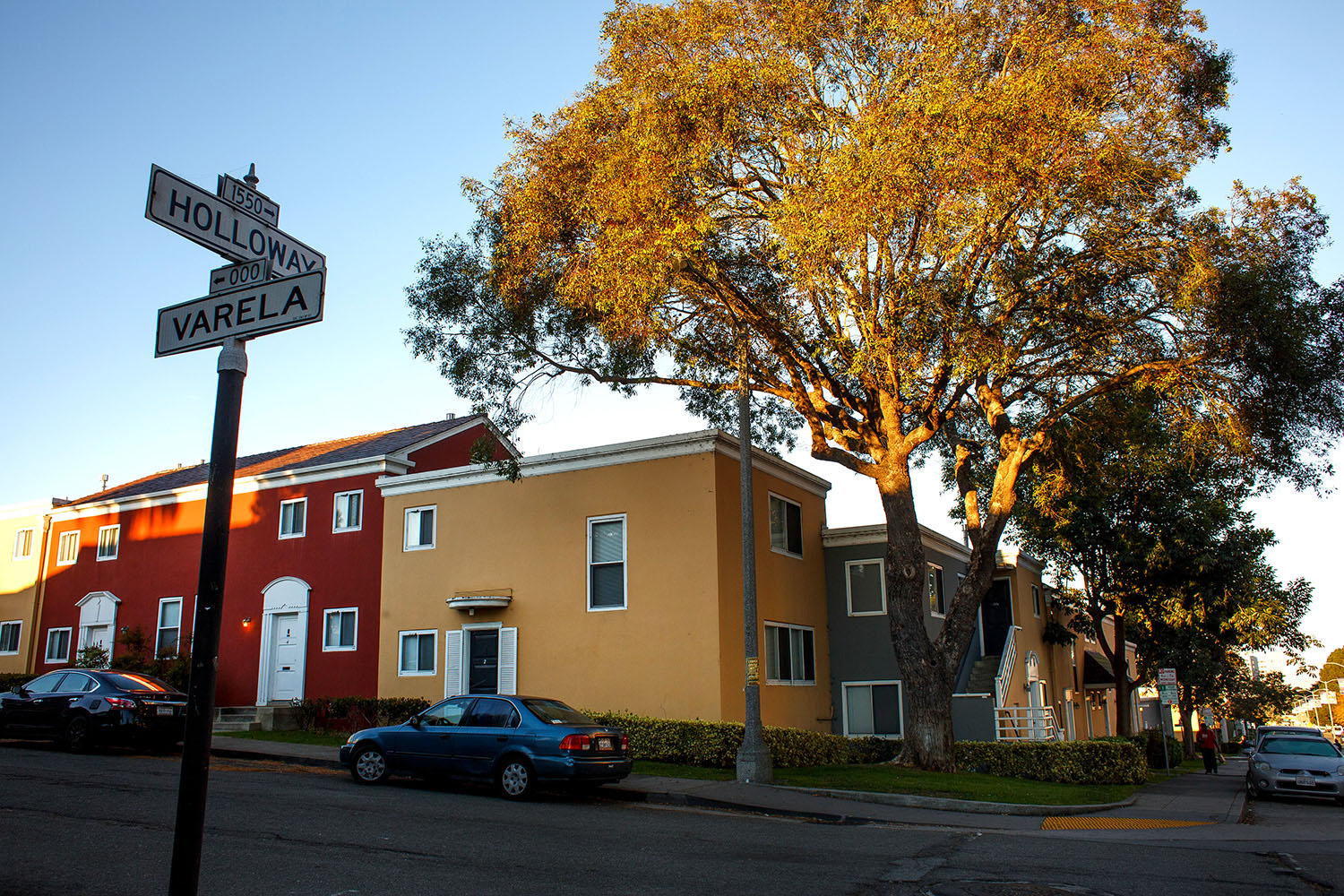 Property on Holloway Avenue, between Varela and Cardenas avenues owned by the University, is slated to be demolished and replaced with new student housing and commercial businesses at SF State beginning September 2016. (Ryan McNulty / Xpress)

proposal process due to the University Thursday, according to Porth. He stressed that the prices

would be below market rate.

“It will probably be comparable (to dorm rates) or a higher modest premium, given that it’s new

construction and it’s such a great location,” Porth said. “But one of the missions of this project is

to be able to provide additional housing stock for the campus community that’s affordable.”

If the development of the Varela and Cardenas block goes well, the University hopes to extend

construction to the rest of UPS, according to Porth.

“There are all kinds of needs that we have — space is tight here, so we need to make sure we’re

utilizing every parcel to its fullest capacity,” Porth said.

All long-term residents from the first parcel for the Holloway Avenue development have been relocated to similarly -sized units at UPN and UPS, said Student Housing Program Director Philippe Cumia.

As part of District 7, SF State is represented on the San Francisco Board of Supervisors by Supervisor Norman Yee, who said the struggle students face affording rent results from the city’s housing crisis.

“I had to work through college pretty much on my own, but the reality is, when I was going to college, I could work and pay for it,” Yee said. “Now, you can work two jobs and you still can’t pay for (rent).”

SF State students forced to sleep in their cars or couch surf is not a new, pressing issue, according to Yee, who said he remembers students sleeping in their cars while he was in school.

“Students will do whatever they need to do,” Yee said. “That’s not the ideal situation, but a lot of that depends on what other resources you have.” 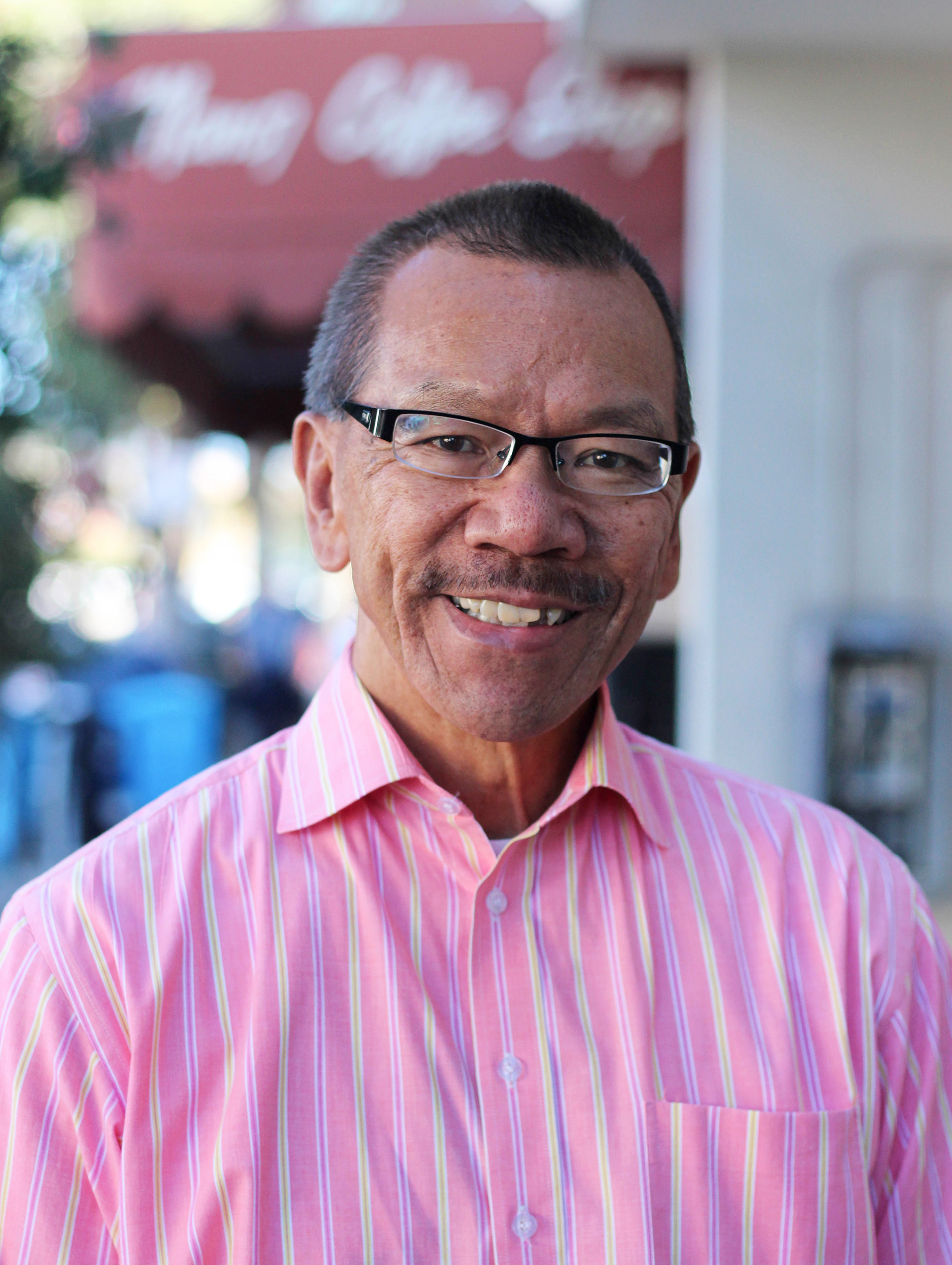 Sheila Tully, San Francisco’s chapter president of the California Faculty Association and SF State anthropology professor, said she has personally experienced the Bay Area’s housing crisis. Tully said after living in the same outer Richmond home for 28 years, where she and her husband raised her daughter, her family was suddenly evicted.

“That was our neighborhood; we knew the bankers, the tellers, the dry cleaners, the coffee shop,” Tully said. “We had pizza parties with our neighbors and the kids watched videos. (The eviction) was right up there with the death of my father as one of the most incredibly devastating experiences of my life.”

Salaries of SF State faculty and professors are insufficient to cover housing in the Bay Area, according to Tully, who said the CFA is currently fighting for a 5 percent increase in faculty pay in a collective bargaining agreement with the CSU, which is holding firm at 2 percent. 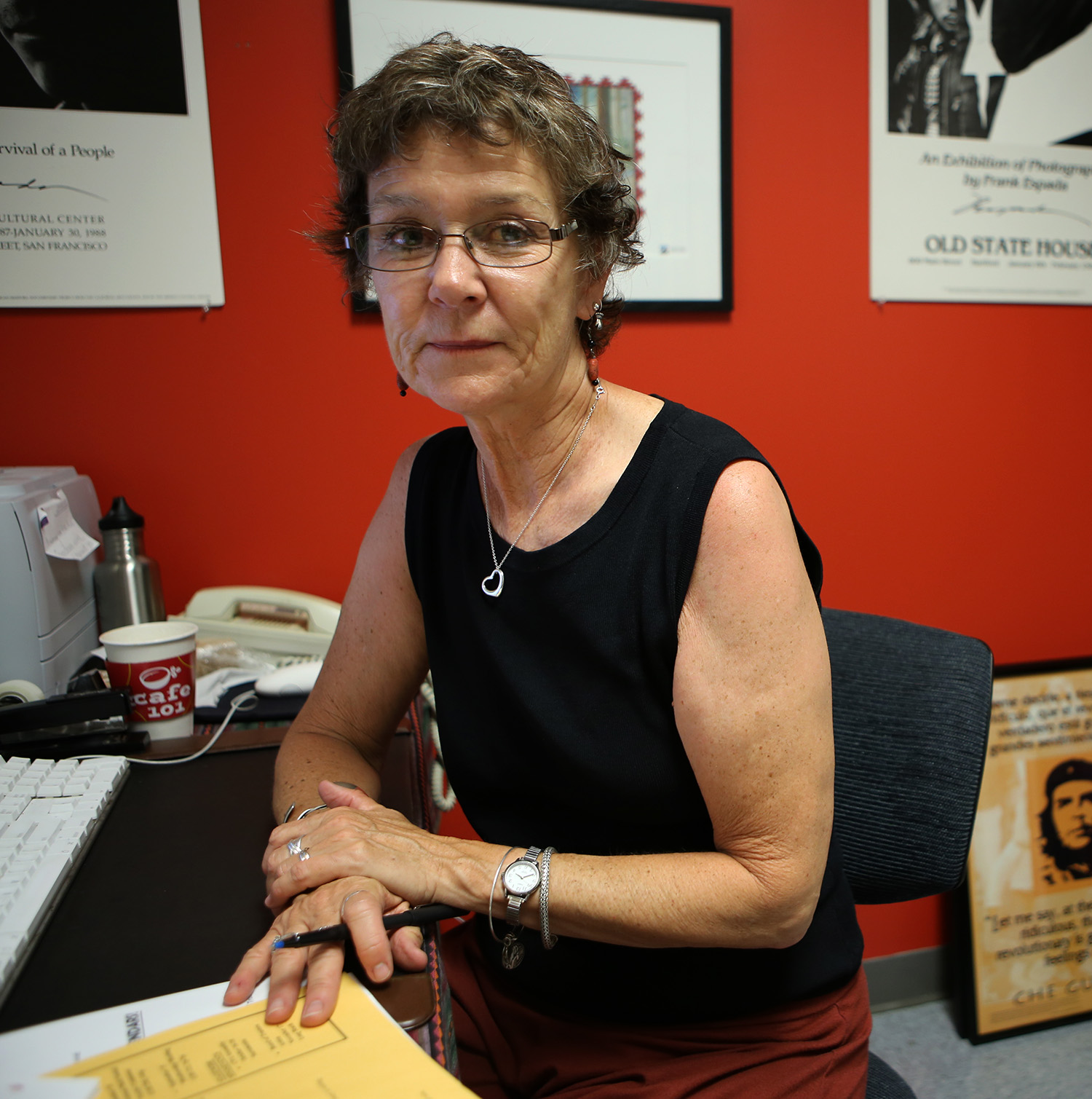 Sheila Tully, SF State California Faculty Association (CFA) chapter president and SF State anthropology professor, poses for a portrait in her office Tuesday Sep. 8, 2015. The CFA and California State University are negotiating wages for faculty through a collective bargaining agreement, which began May 2015. The CFA is demanding a 5 percent general salary increase for all faculty. (Joel Angel Juarez / Xpress)

Matthew Silverman, an SF State lecturer in health and social sciences, said he endures a two-hour round trip commute every day from his parents’ house in Mountain View. He said the extra driving time is exhausting and makes it hard to pursue outside interests.

Living with his parents allowed him to save enough money for a down payment on a house in San Francisco, Silverman said. He has made several offers on places close to SF State, but said he lost in bidding wars each time.
“I’m one of the higher-paid lecturers on campus, and the most I can afford is either a one-­bedroom condo or a house that’s half broken down,” Silverman said. “If I were supporting a wife and a kid, it would be impossible on this salary to live anywhere within an hour and a half of here.”
SF State health and social sciences lecturer Matt Silverman fills his car with gas for his long commute home to Mountain View Monday, Oct. 12. (David Henry / Xpress)
SF State health and social sciences lecturer fixes a broken piece of equipment in the clinical sciences laboratory in the science building Monday, Oct. 12. (David Henry / Xpress) 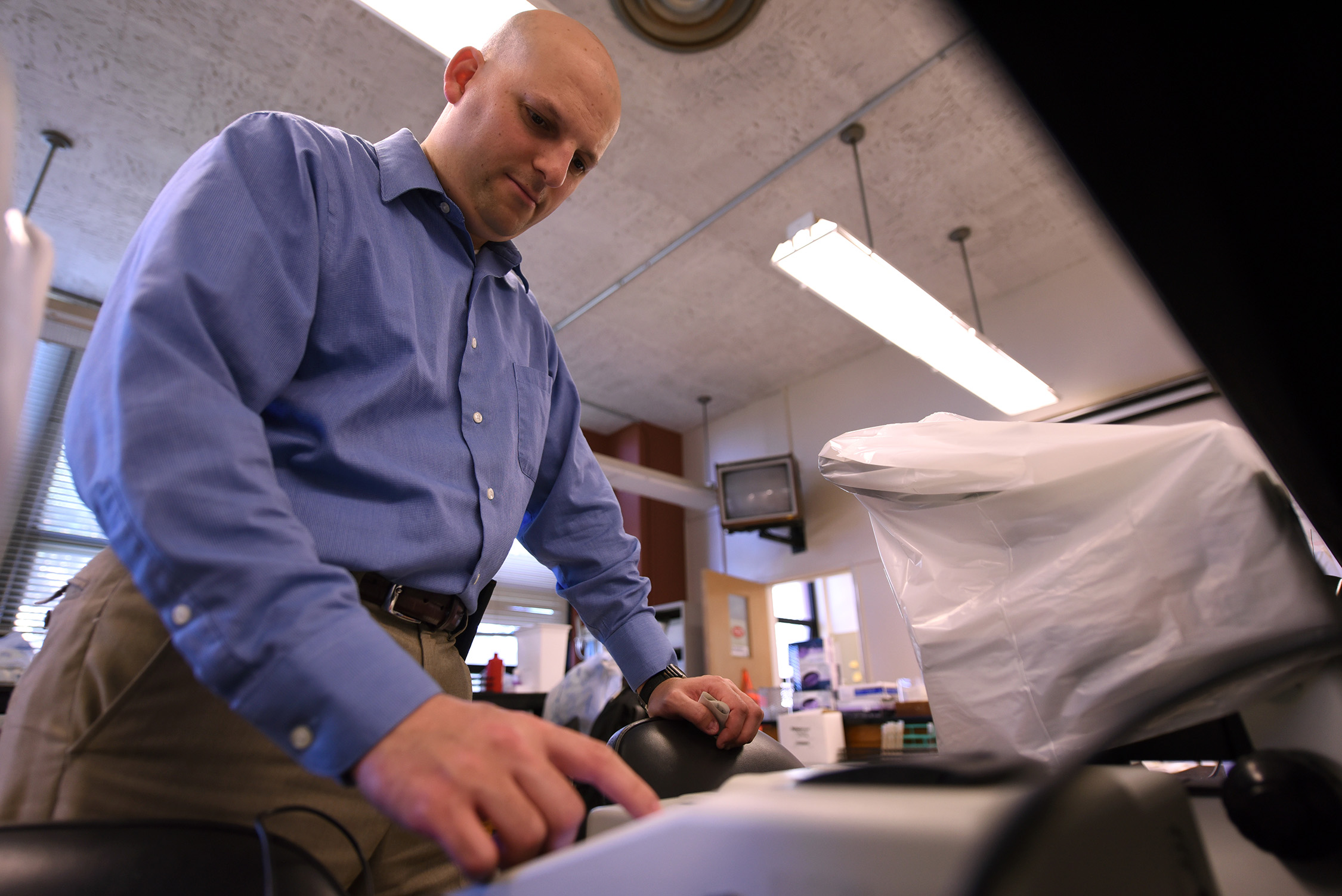 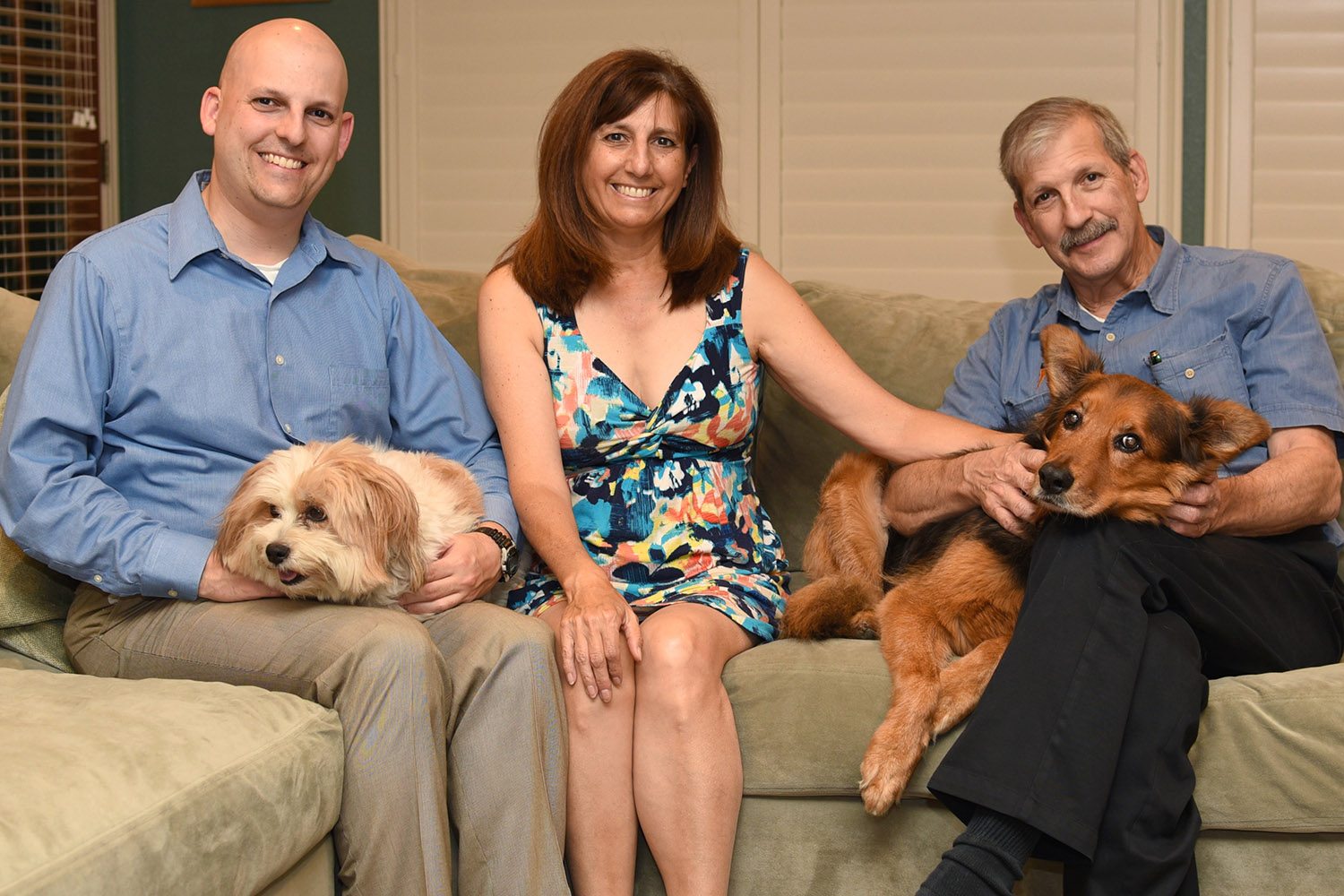