WHERE IT IS NEEDED MOST

If you lived in the path of the storm on the morning of Friday 8th November 2013, it was as if the sun didn’t rise. The wind and the rain whipped up by Typhoon Haiyan made the air so thick and white it was hard to clearly see the catastrophe which was unfolding. The relentless, cruel noise and the pressure created in their heads and ears made it even more terrifying for every women, man and child. Many felt lost and isolated as they prayed for the storm known as Yolanda in the Philippines to pass over them.

The storm statistics tell it all: Haiyan was the strongest tropical cyclone to ever make landfall – at a speed of 195 miles per hour. Powerful gusts of wind came, wreaking havoc at 235 mph. The seas around the hard-hit Visayas islands surged 13 feet. A 30-mile wide swath of destruction was carved through the heart of the nation.  From 70 to 80 per cent of anything in the storm’s path was demolished.

The town of Palo, south of the main city of Tacloban on the island of Leyte, is close to where Typhoon Haiyan made landfall. It’s devastated. It’s also poor  – 40 per cent of Filipinos live on $2 a day – and many people did not have robust homes. In some parishes, priests estimated that they had lost between a third and two-thirds of their congregations.

Pope Francis pleaded for aid for the survivors : “Sadly, there are many, many victims and the damage is huge. Let us try to provide concrete help.”

The United Nations gave the disaster its highest ranking classification – category 3. That’s on a par with the Indian Ocean tsunami in 2004 and Haiti’s 2010 earthquake.  In the Philippines, 13 million people were affected. Over 6 thousand died. Months later bodies were still being recovered. The damage cost an estimated $36 billion.
Kristele Agote, the 25-year-old mother of a year-old baby girl, lost her home during the terrifying storm. “We hid under the table at my grandmother’s house and packed heavy things on top to stop it being blown away. It was suffocating and I began to vomit. At one point there was a huge thud – a coconut tree collapsed onto our roof. But it stopped it being blown away. We were cold and hungry and the children were screaming in fear.”

When Kristele returned to her own home – built just three months ago – she found it completely destroyed. Only the modern toilet she and her husband installed stood where it had been before the storm. “We are living under this tarpaulin given to us by Caritas - at least it covers the hole in the roof. Caritas also gave us food. Everything was spoiled in the shops.”

“We have never experienced a typhoon like this. I feel very sorry for my little girl – she should never have had to experience this.” 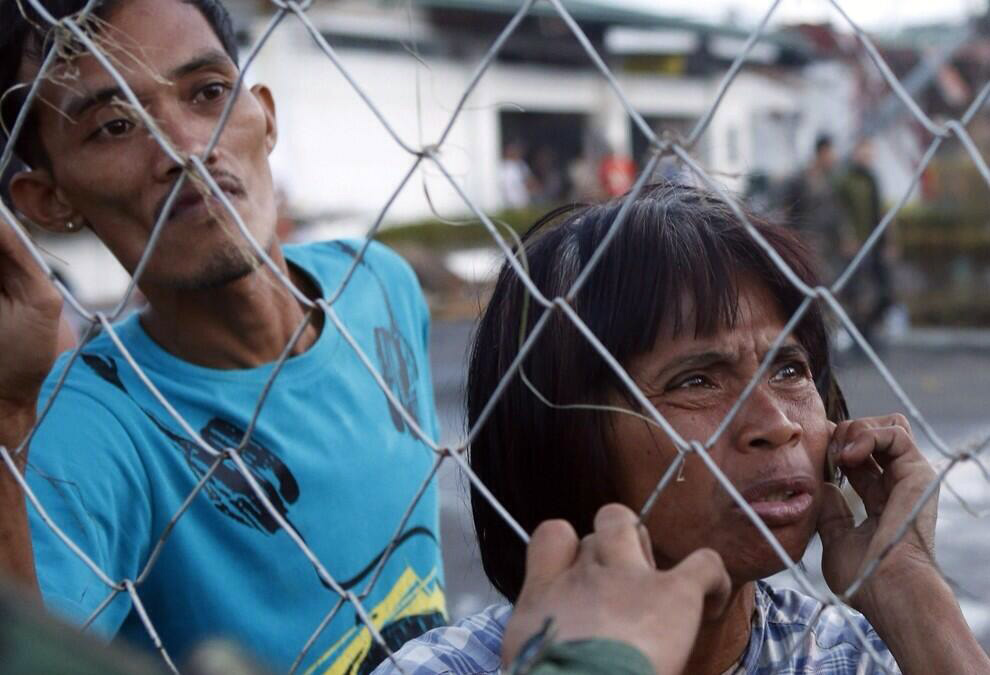 FATHER IVO RODRIGUEZ'S STORY - THE PRIEST WHO BLESSED THE DEAD AND THE LIVINGThe sturdy brick building of the Sacred Heart Seminary in Palo was also not spared by the strength and speed of Typhoon Haiyan. Father Ivo Rodriguez, a 31-year-old priest, lives and teaches there. "I thank God, because I am still here – many of my neighbours didn’t make it. We found their bodies around the seminary."

Father Ivo monitored the approach of the storm until its force cut communications off. "I was hiding in a small closet which we used to store sports equipment. I could feel the walls shaking as if there was an earthquake. I couldn't see much outside - everything was white because of the seawater. When I tasted the water on my lips I felt even more afraid, as my family live in a village right by the shore."

"I understood what eternity felt like - the storm didn’t seem to end. The wind was screaming in my ears like twenty trains going over my head and the noise when first the doors and then the entire third floor blew off was terrifying.  The water began rushing in – up to my knees in thirty seconds. I was soaked and shivering."

For Father Ivo it was an experience of disaster and of faith. He prayed to God and also to a picture of Pope John Paul II, which he fished out of the flowing water.

As Father Ivo ventured out into Palo he met people carrying their dead to the doors of the cathedral. "It was like a scene out of a movie. I could not believe I was in this landscape which was so totally destroyed I couldn't recognise the familiar landmarks that I was accustomed to.  When I walked to Tacloban, people stopped me because I am a priest and they needed to talk and to have their dead blessed. It was a consolation which I could offer in the first few days, when no one could reach us to help and we felt very alone."

"I could finally accepted the possibility that I could die. It’s the bravest moment in my life...accepting the fact that you could die"
A TRAUMATIC HISTORY OF STORMS